For over six decades the Buffalo Bills have called western New York their home, playing in two stadiums since their founding: War Memorial Stadium and Highmark Stadium. Their current home, Highmark Stadium, opened in 1973 is the third oldest stadium in the NFL. Since 1995 nearly every team within the NFL has moved into a new stadium or significantly renovated their existing one. While Highmark Stadium has been updated multiple times over the past four decades, it lacks many of features that generates revenue for the Bills. Over the course of the past decade the Bills have sought multiple times to have a new stadium built, including proposals to build a stadium in downtown Buffalo and adjacent to Highmark Stadium.

In March 2022 the Bills, the State of New York and Erie County announced they had agreed to a deal to finance construction of a new stadium. To be constructed at an estimated cost of $1.4 billion, the state will contribute $600 million, Erie Country $250 million, the Bills $350 million and the NFL $200 million to the project. The Bills new stadium will be constructed adjacent to Highmark Stadium across Abbott Road. It’s projected to open in Fall 2026 with an estimated seating capacity of around 62,000. The stadium will be enclosed on all sides and feature a canopy that covers 65% of the seats. This is not only to block any inclement weather, but to project crowd noise towards the field, making it one of the loudest stadiums in the NFL. It will feature radiant heating to offset the bitter cold during the latter months of the season, multiple videoboards, social gathering spaces, unique concession areas and club seating options. 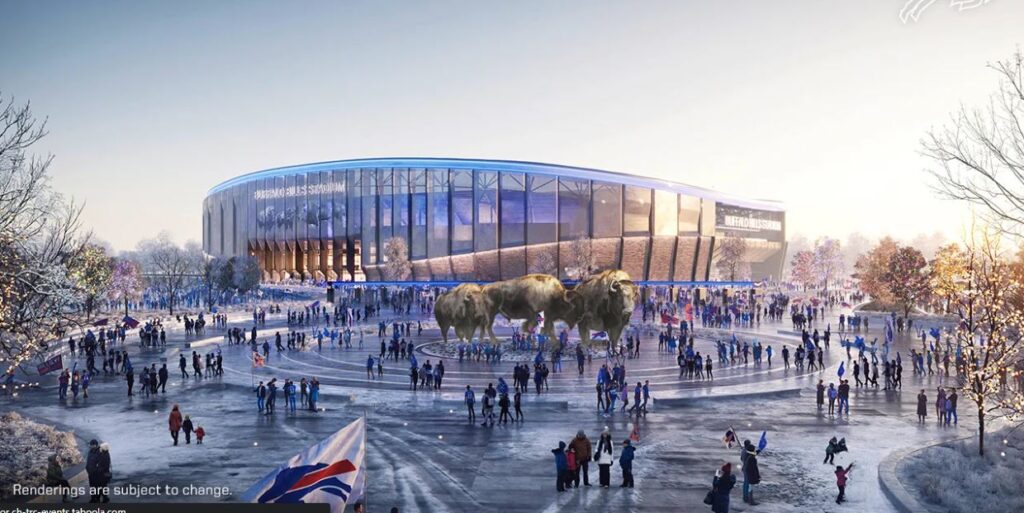