The saying, “what’s old is new again” is true for the coliseum as it became home of the Los Angels Rams in 2016 for four seasons. The coliseum has been the home to many great events since its opening in 1923 including the site of two Olympics, the Super Bowl, World Series, multiple college football teams and two NFL franchises.

Constructed as a memorial to Los Angeles World War I veterans in the early 1920s, the coliseum opened in 1923 and became the home of the USC Trojans football team with a seating capacity just over 75,000. The capacity was increased to over 101,000 for the 1932 Summer Olympics. The history of professional football began in 1946 when owner of the Cleveland Rams, Dan Reeves, moved his team to the city, becoming the first NFL team to move to the west coast. They played their first game at the coliseum on September 29, 1946 against the Philadelphia Eagles. The Rams spent more than three decades at the coliseum before moving to Anaheim Stadium after the 1979 season. The Rams played their final game at the Los Angeles Coliseum on December 16, 1979 against the New Orleans Saints. Two seasons later, the Raiders moved south from Oakland to the coliseum, playing their first game on November 22, 1982. The Raiders called Los Angeles home for just 12 seasons before moving back to the Oakland Coliseum after the 1994 season.

For over two decades Los Angeles did not have a NFL franchise. In the late 1980s and early 1990s Rams owner Georgia Frontiere wanted a new football only stadium as she no longer wanted to share the multi-purpose Anaheim Stadium with the Angels (MLB). By the early 1990s, the team was unable to garner support for a new stadium in Los Angeles and began exploring options to relocate to another city. The Rams nearly moved to Baltimore, but since a new stadium was under construction in St. Louis, Frontiere moved the team to St. Louis after the 1994 season. A new dome stadium, the Edward Jones Dome, was the home of the Rams for two decades. By the early 2010s the Rams became dissatisfied with the Edward Jones Dome as it was no longer in the top tier of stadiums in the NFL. In January 2015, owner of the Rams, Stan Kroenke, announced plans to build a 80,000 seat NFL stadium in Inglewood, CA, just outside Los Angeles. The 2015 season marked the Rams last season in St. Louis and the Edward Jones Dome. On January 12, 2016 NFL owners voted to allow the Rams to move to Los Angeles for the 2016 season. Professional football once again returned to the Los Angeles Coliseum for four seasons, 2016 through 2019, as a new stadium was built for the Rams.

Today the Los Angeles Coliseum has a seating capacity of 77,500 consisting primarily of one seating deck surrounding the playing field. The most iconic feature of the coliseum is its east end entrance where the Olympic cauldron torch is located along with two life-sized bronze statues. On September 18, 2016 the Rams mark their return to Los Angeles as they play their first game back at the Los Angeles Coliseum, a victory against the Seattle Seahawks. The Rams played four seasons at the coliseum and moved into their new stadium, SoFi Stadium, in 2020. 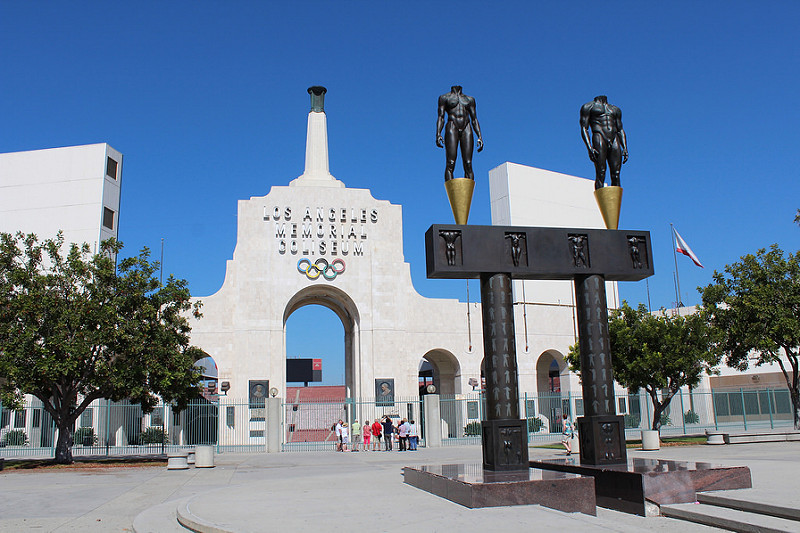