With a legendary history that includes five Super Bowl Champion teams and Hall of Fame players including Joe Montana, Jerry Rice and Steve Young; Candlestick Park was the home to some of the greatest teams in NFL history.  Originally built for the San Francisco Giants (MLB), Candlestick Park was the home of the 49ers for over four decades. Talk of building a stadium in the San Francisco area began in 1954, when mayor George Christopher promised to build a stadium if a major league team would move to the area. Later in the year, a $5 million bond was issued to build a new stadium. Along with the Brooklyn Dodgers (MLB), the New York Giants (MLB) decided to move to the west coast after the 1957 season. The Giants moved to San Francisco and the Dodgers moved to Los Angeles.

Two locations for a new stadium in San Francisco were discussed. One in downtown and one at Candlestick Point. The site at Candlestick Point, located near the San Francisco Bay, was chosen because of its lower price and affordability. Construction of the stadium began in August 1958. However, immediately after construction began, several problems arose. Neighbors complained about numerous issues, grand juries investigated irregular funding, seat installation was delayed because of a teamster strike, and the stadium was called a “fire trap.” Nevertheless, the stadium was completed. The stadium was named Candlestick Park, after its location. The Giants played the first game ever at Candlestick Park on April 20, 1961. In September 2004, Candlestick Park was renamed Monster Park, after Monster Cable Products Inc. purchased the naming rights for four years. The stadium’s named reverted back to Candlestick Park in March 2008 after the stadium naming rights deal with Monster Cable Products expired. A city ballot measure restricted the team from pursuing the highest bidder for the right to name the stadium. 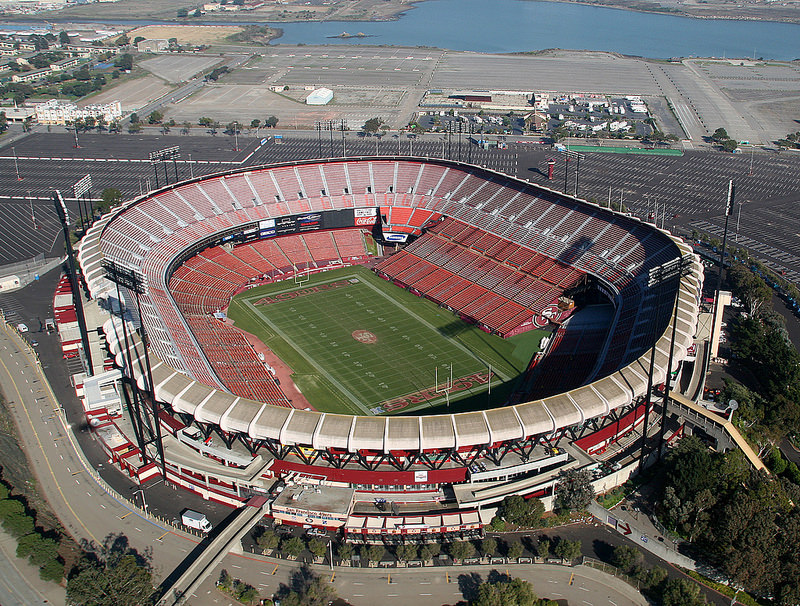