A new chapter in the history of professional football in Los Angeles begins in 2020 as the Los Angeles Chargers and Rams move into SoFi Stadium.  For more than two decades the second largest city in the United States, Los Angeles, was without a professional football team. That changed in 2016 as the Rams moved back to the city from St. Louis. The Rams move to Los Angeles was a homecoming as they played here from 1946 until 1994. They moved to St. Louis at the beginning of the 1995 season after failing to have a new stadium built to replace Anaheim Stadium.

After the Rams left in 1994 numerous developers sought to build a new stadium in the Los Angeles metro area in attempt to lure the NFL back to the city. In January 2015, Rams owner Stan Koreneke announced plans to build a stadium in Inglewood, CA as he was unsatisfied with the Edward Jones Dome in St. Louis. The following month the San Diego Charges and Oakland Raiders announced they had partnered to explore the possibility of building a stadium in Carson, CA. On January 12, 2016 NFL owners voted to allow the Rams to move to Los Angeles for the 2016 season and construct a stadium in Inglewood. NFL owners also gave the Chargers a one year option to join the Rams, sharing the new Inglewood Stadium. In January 2017 the Chargers announced plans to leave San Diego and join the Rams in Los Angeles after failing to receiving support for a new stadium to replace Qualcomm Stadium. Construction began in late 2016 and unusual heavy rainfall in 2017 significantly delayed the timeline for the project to be completed, as the stadium was originally scheduled to open in 2019. While the stadium was under construction, the Rams played at the Los Angeles Coliseum and the Chargers played at the StubHub Center.

SoFi, an online finance company, purchased the naming rights to the stadium in 2019 for $30 million annually . The Los Angeles Rams played the first NFL game at SoFi Stadium on September 13, 2020 against the Dallas Cowboys. The following week, the Chargers played their first game at Sofi Stadium against Kansas City Chiefs on September 20, 2020. SoFi Stadium is unlike any other facility in the NFL. Outside, there is a 2.5 acre plaza between the stadium and a 6,000 seat open-air performing arts venue, a lake with waterfalls and significant landscaping that is native to Southern California.

As fans approach the stadium, they will notice it has a low-profile as the playing field is 100-feet below street level, with the roof rising 275 feet above the field. The roof, that is really a canopy as the stadium is not enclosed, is in the shape of a massive sail and is constructed of translucent glass allowing natural light into the facility. Panels at both ends of the stadium can be opened or closed to allow breezes in.

Inside SoFi Stadium has a seating capacity of 70,000 that’s expandable to over 100,000 for high profile events. Multiple levels of seats surround the playing field including 260 luxury suites. The highest seats at SoFi Stadium are nearly 50 feet closer to the field than the closest seats at the Los Angeles Coliseum. One of the most unique seating areas at SoFi Stadium are the cabanas, a field level beach club behind one endzone. Fans will never miss a replay with the massive video board above the playing field. The stadium features a two sided, oval shape video board that hangs from the roof of the facility. It is 120 yards long by 40 feet tall.

Not only is the stadium home to the Rams and Chargers, but it will host a number of high profile events in future years. This included Super Bowl LVI in 2022, the College Football Championship game in 2023, the 2028 Olympic opening and closing ceremonies, the 2026 FIFA World Cub and WrestleMania 37 in March 2021. 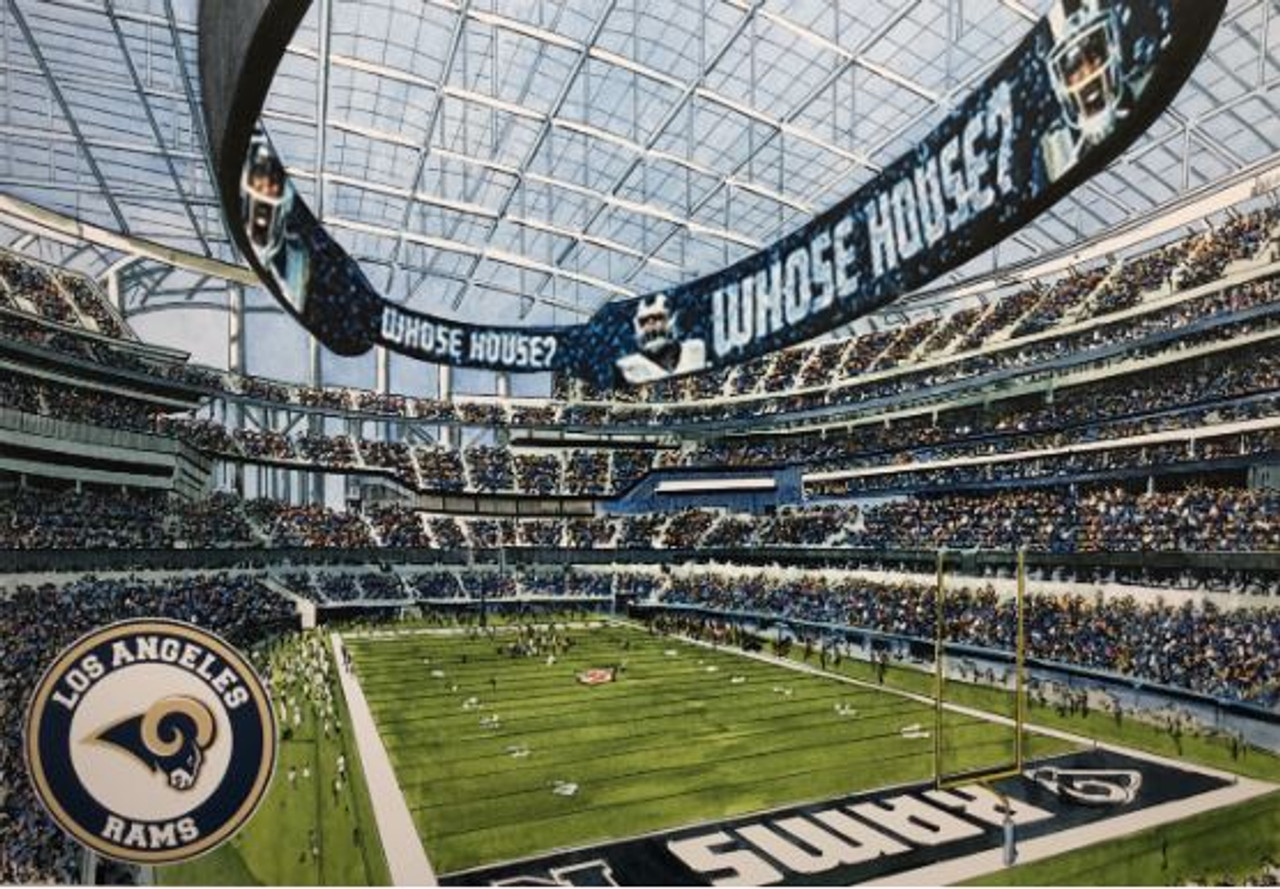